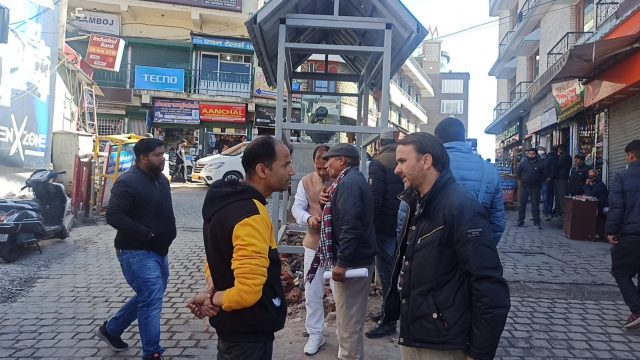 By Our Staff Reporter
Mussoorie, 21 Nov: The Mussoorie Municipality is rebuilding the barrier on the Mall Road, here, for which a ticket house is also being made. The barriers will operate at Picture Palace and Gandhi Chowk. This is being opposed by the local people and Congress leader Megh Singh Kandari.
Kandari said that the ticket house is being shifted to the Mall Road, which would increase the chances of accidents, with heavy traffic expected in the coming times. He said it should be Mall Road established where it was in the past. The maintenance of both the barriers has been handed over to The Savoy Hotel. The hotel would put up its hoardings, etc., at both the barriers to promote the hotel, which he felt was wrong. He reminded that Mussoorie Municipality is the richest in the country, and giving lucrative resources into private hands was not acceptable. He wanted the name of the Municipality written on both the barriers.
Satish Kumar, General Secretary of IPTA, alleged that there were irregularities in the construction of both the barriers. He recalled that the statue of Bhagat Singh was to be installed at the barrier on the Mall Road, but that had not happened. Gaurav Gupta, Wasim Khan, Anita Saxena and others were present on this occasion.