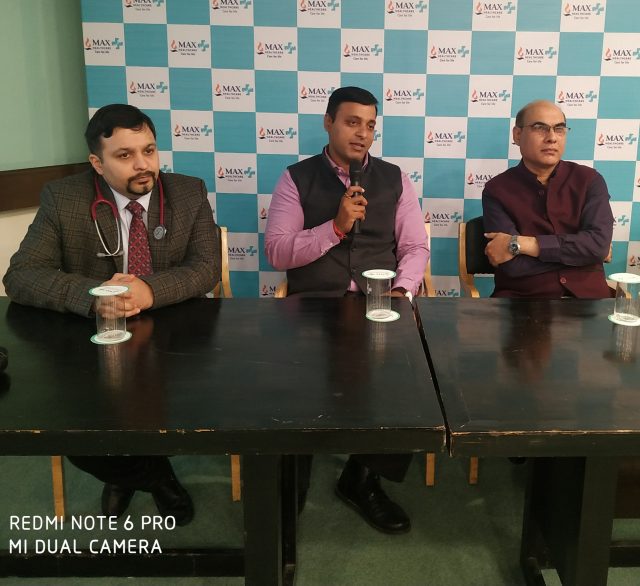 DEHRADUN, 19 Nov: In order to create awareness on Chronic Obstructive Pulmonary Diseases (COPD), the pulmonologists at Max Hospital, here, addressed a press conference, today, to share the various facts and myths regarding the problems related to lungs. COPD is progressive respiratory disease due to inhaled toxic, noxious particles smoking and pollution. According to Dr Puneet Tyagi, Associate Director, Department of Pulmonology, “Many people mistake their increased breathlessness and coughing as a normal part of aging. In the early stages of the disease, one may not notice the symptoms. COPD can develop for years without noticeable shortness of breath. Person begins to see the symptoms in the more developed stages. COPD is a progressive form of lung disease ranging from mild to severe, characterised by obstruction of airflow into and out of the lungs that makes breathing difficult, which can be detected with the help of a simple spirometry test.” COPD is mostly seen in people above 40 years of age with a definite history of smoking. COPD can also occur in those who have had long- term contact with harmful lung irritants in the workplace like chemicals, dust, or fumes and organic cooking fuel. In India, especially in the hill region, people tend to cook with charcoal or firewood exposing women more to the toxic fumes and a major cause of non-smoker COPD. With the change in weather, people having COPD are more prone to illness. The effects of cold weather are hazardous on COPD lungs and are known to cause changes to the respiratory system exposing them to secondary bacterial/ viral/fungal infections. There is no cure to COPD but proper medical treatments are available which can help prevent more damage and improve quality of life. In addition to offering medications, oxygen therapy, or pulmonary rehabilitation, one should make lifestyle changes.”All together to End COPD” is the theme for world COPD day this year, to pledge quitting smoking. It is affecting 251 million lives globally and causing 3.15million deaths per year and is the 2nd biggest cause of non communicable deaths in India. Making these changes to the daily habits can play a key role in decreasing the physical symptoms. One should quit smoking, eat a nutritious diet, stay active, maintain a safe environment (avoid air pollution, indoor fumes and passive smoking, stop choolah cooking).” Dr Vaibhav Chachra, Consultant- Pulmonology at Max Hospital, further explained, “Smoking has increased in adolescent and young generation. COPD can develop in non-smoker individuals due to passive smoking and environmental tobacco smoke. Decreased capacity to inhale oxygen and exhale carbon dioxide can lead to increased risk of Lung Cancer or heart attack.” He added, “Air pollution has significant impact on lungs. There is increased morbidity in COPD patients with increasing age.” Dr Sandeep Singh Tanwar, Vice President, Operations & Unit Head, added, “Max Dehradun has now introduced interventional pulmonology:- EBUS (Endobronchial Ultrasound); Flexible Bronchoscopy for newborns– any age; Tracheal Stenting; Foreign body removal; Thoracoscopy; Smoking Cessation Clinics; Lung Cancer Screening Programmes; and Max healthy lung mission.