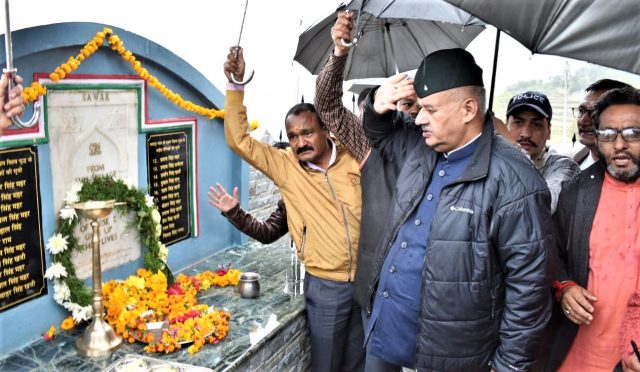 By Our Staff Reporter
Mussoorie, 18 Oct: Sainik Welfare Minister Ganesh Joshi will organise a meeting of more than 10,000 ex-servicemen at Sawad Village on 21 October to mobilise the general public regarding preparations for the Shaheed Samman Yatra to be flagged off on that day from the military-dominated village in Gopeshwar’s development block Dewal.
He has appealed to BJP workers to make efforts to mobilise as many people as possible. Before the meeting, Sainik Welfare Minister Ganesh Joshi and other dignitaries will pay tribute to the martyrs by paying floral tribute at the Martyrs’ Memorial in Sawad.
According to Ganesh Joshi, Shaheed Dham, the 5th Dham of Uttarakhand, to be built in Dehradun is one of the dream projects of Prime Minister Narendra Modi. He claimed that after the construction of this Sainik Dham, the pilgrims coming to visit the Char Dhams of Uttarakhand would also pay a visit there. Soil will be taken from the courtyard of each martyred soldier in the villages and towns of the state to be used in the construction of the Sainik Dham in Doon.
Ganesh Joshi claimed that every fifth soldier in the country belongs to Uttarakhand, so it is the duty of all to respect the soldiers and their families. Apart from the Chief Minister, Union Ministers, many common people would also be present in Sawad village.
Former Minister of State Jyoti Prasad Gairola said that the Shaheed Samman Yatra will start from Sawad on 21 October and, in Kumaon, on 24 October. Tharali MLA Munni Devi Shah, while welcoming the minister and others, appealed for large mobilisation on 21 October. Head of Dewal Block Dr Darshan Danu said that starting the rally from Sawad village extended respect not only to Dewal block but also Chamoli district.
Present on this occasion were Badrinath MLA Mahendra Bhatt, Chief Minister’s coordinator Dalveer Danu, BJP District President Raghuveer Singh Bisht, General Secretary Sameer Mishra, District Vice President Nandi Kunyal, former MLA Govind Lal Shah, Colonel HS Rawat Narayanbagad Chief Yashpal Negi, former Tharali Chief Rakesh Joshi, Asha Dhapola of Sawad, Sheetal Gadia, President of BJP, Dewal, Ranjit Singh Negi of Tharali, General Secretary of Dewal, Umesh Mishra, KD Mishra, Devendra Negi Deva, Narendra Bharti, Yuvraj Baseda, Alam Singh Bisht of Sawad, Kshipans Diksha Mehra , Inder Singh Bihari, Kalam Singh Khatri, Virendra Bisht, Soban Singh Khatri, Manoj Kumar, etc.
Also present were Tharali SDM Sudhir Kumar, Lonivi Tharali Executive Engineer Ajay Kala and officials of all departments.