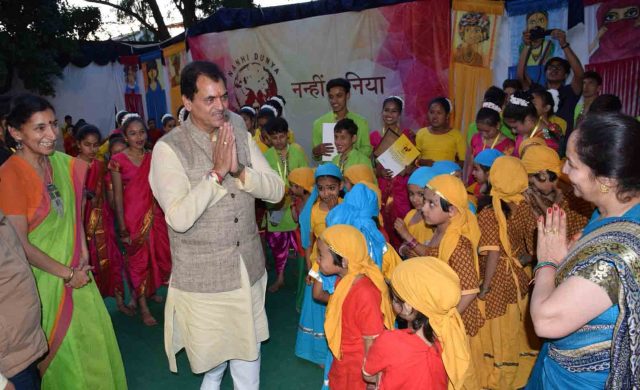 Dehradun, 20 Nov: Nanhi Dunya (the International Movement of Children and their friends) completed 73 years of commitment and joy. Nanhi Dunya was founded in 1946 by Prof Lakh Raj Ulfat. Later, he was joined by his wife Sadhna Ulfat. Together, they strove for expansion of their activities and evolution of the movement.
It was a humble beginning with eight tiny tots and three adults gathering for the first time on a blanket under a huge Silvery Oak while singing “Dunya Ko Swarg banaa denge” (we will transform this word into heaven.) They were the first members of Nanhi Dunya Bal Sabha, Children’s Republic.
This weekly children’s club and recreation centre became very popular. The membership swelled and Bal Sabha multiplied. It became a movement of children and their friends. Some connections were established with individuals and organisations from different parts of the world that had similar aims and objectives as Nanhi Dunya.
The celebrations of the Founder’s Day began early on 17 November with Prabhat Pheri followed by prayers to the rising sun. Satvika Goyal guided the children in the morning ceremony during which they sang melodious songs. She explained to students about the importance of the environment. Later, it was followed by Hawan & sarve dharm prarthana. Children sang songs of optimism with lots of joy.
In the evening, the customary lighting of the lamp was lit by Vidhan Sabha Speaker Prem Chand Agarwal. The children welcomed the guest with the traditional ceremony of tilak and a marigold garland.
The participants presented a “used empty match box” containing a coin to Kiran Ulfat Goyal. The main force behind this gesture has a special meaning, it conveys that each individual has the divine power of giving and we should learn to respect children and accept that they have a unique place in our lives.
Satvika Goyal welcomed the guests and shared her experiences on the cultural educational programme of ‘Brave Kids’, a festival in Poland which was attended by children of Nanhi Dunya this year. The young artists of Rangshala presented a colourful fusion dance, together with 50 other children. This same performance was presented at the international event of Brave Kids. The programme started with a Sanskrit mantra; then little toddlers danced to the folk music of Himachal Pradesh and Uttarakhand. Later on, it got merged with international cultural folk dances, which were from Palestine, Peru, Poland, Colombia, Iran, Kazakhstan, Slovakia, Syria, Kenya, Ukraine and India (Bhangra, Garba, Lawani, Rajasthani and Ganpati dance). The children with special needs presented a dance-drama, which gave the message that people should love the environment and keep the village traditions alive. Besides that, they also motivated people to save the local villages.
Chief Guest Prem Chand Agarwa, praised the endless efforts of Nanhi Dunya and said, “Some time ago a group of children from Nanhi Dunya visited me as they were traveling to Poland and Ukraine to represent Indian culture in the international cultural and educational programme, Brave Kids. At that time I didn’t know much about the organisation. But after seeing their performance, today, I can say that these children not only understand different cultures of the world but also believe in the beauty of aesthetics. I believe that children should not limit themselves with the knowledge of books but try to attain overall knowledge that includes artistic activities. It gives a balance in the livelihood of the child. Today, I can see that children from Nanhi Dunya are blessed with the knowledge of both sides of the brain. I want to congratulate the organisation for putting a tremendous amount of hard work in the upbringing of these children. In 73 years the children of Nanhi Dunya have established many records by following the high ideals set by its founder at national and international levels.“
“I am not in a position to say much about government schools in India, but if one wants to really acquire overall knowledge with personality development then a child must come to Nanhi Dunya, where children are helped to explore their talent, abilities and potentials,” he continued.
On this occasion all children who represented India at the Brave Kids Festival in Poland were also honoured by the chief guest for their excellent performance.
Kiran Ulfat Goyal expressed her heartfelt thanks to Prem Chand Aggrawal. On this special occasion, friends from The Netherlands – Tirza and Remco – were also praised for their contributions towards Nanhi Dunya. Dignitaries present on the occasion were VK Goyal, Rohit Shukla, Col Ravi Mehrotra, Yogedra Singh, Urmila Thakur, Alok Jain, Chhaya Sharma, Raghunandan and Aman Arora.

Garhwal Post has established itself as a credible, balanced and forward looking newspaper in India. Based in Uttarakhand, the daily is read by the aware, socially and culturally responsible, high-income elite of society.
Contact us: info@garhwalpost.in
https://garhwalpost.in/new-dating/