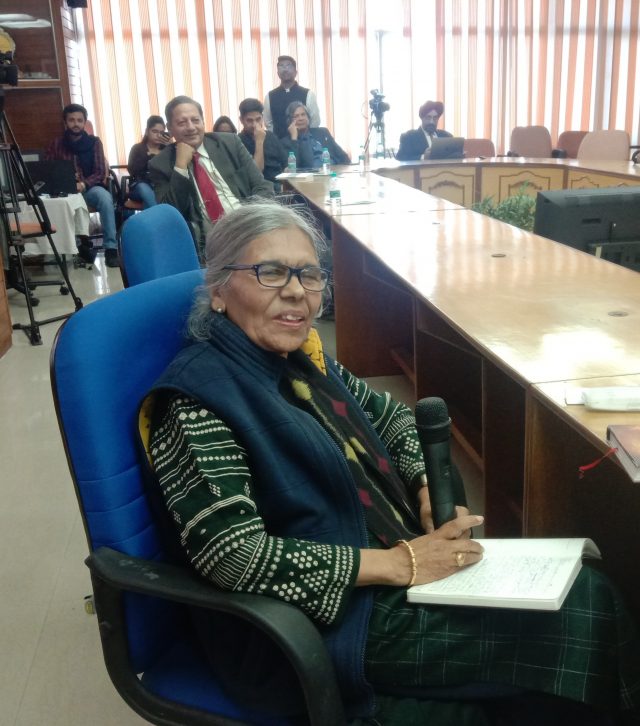 DEHRADUN, 20 Nov: On the second day of the Valley of Words Literature Festival 2021 being held in Dehradun, it was the turn of the award winning authors to deliver their acceptance speeches. While Menaka Raman, spoke about her book, ‘Loki takes Guard’ awarded in the category of Writing for Young Adults, Lavanya Laxminarayan spoke about her book, ‘Analog/Virtual: And Other Simulations of Your Future’, published by Hachette India, which won the award in the category of English Fiction. Paro Anand spoke about her book, ‘A Quiet Girl’ awarded in the category of Writing for Children. Menaka thanked her publishers ‘The Speaking Tiger’ and the Festival Director Dr Sanjeev Chopra for her honour. She reminded that usually, writing for young adults was not considered as important enough category to carry a separate award but she was thankful that Valley of Words Festival had created a separate award for this category of writing. She reminded that she got the idea of writing this book after a brief conversation with her neighbour at a bus stop waiting for the school bus to arrive to pick up her sons for the school. She noticed a 10 or 11 year old girl dragging a rather heavy cricket kit. She later found out that this girl was the only girl in the team of boys that played cricket. The idea of the story developed from this incident and the story of the book revolved around a 11 year old girl for whom, Cricket was her entire life. The book revolved around her dreams and struggle that she faced as being the only girl in getting accepted as a cricket player. It took a year and half to write the book and while writing the book, she did not know, if anyone would be interested to publish the book or care for the book. Raman added that very often the young dreams were shattered and dismissed by the elders in the family or the society and how the young minds were pressurised into studying harder to get better scores and better ranks. She emphasised that if the parents wanted their children to read a lot, they ought to grant them same rights that they granted to themselves. In her acceptance speech, Lavanya Laxminarayan who was awarded in the category of English fiction for her book, ‘A Quiet Girl’, said that she was incredibly honoured to have won the award and thanked the PFC VoW jury and the organisers for that. She pointed out that her book revolved around the future of the world in context of an analog and virtual technologies that were taking roots. Lavanya is herself a game designer who has won several mentions and awards for her speculative fiction. She briefed that the book revolved around how the technology had become the key to survival in Apex City, where productivity was the power and the self ought to be engineered for the only noble goal in life: success. Lavanya thanked everyone concerned for believing in her words. This story was a work of Science Fiction set in Apex City the future version of Bangalore. She said that she began writing the book after realising how her life had become dependent on the technology which had become an integral part of human lives already. She pointed out that her book is not predictive in nature as prediction was not the business of a novelist but that of clairvoyants. She added that she realised that while technology did make everyone’s life a lot easier, but at the same time restricted the access to technology and dissemination of information to the elite class. The book was written with the objective to make the readers realise that technology was a double edged sword. In her acceptance speech, Paro Anand spoke about her book, ‘A Quiet Girl’ published by Penguin Random House. She pointed out that the book revolved around a quiet girl though she had been a noisy girl herself and had a special liking towards noisy girls. She added that she had been more into writing for young adults than writing for children. The book took shape when the publishers approached her with the proposal for writing one for the children. She reminded that her first idea of a story in this category was actually rejected and that it was her first rejection that she faced as writer so far. It was tricky to write this book that was very slim and was about a girl who was a quiet person. One had to tell the entire story in fewer words in the book and she admitted that she struggled to manage this. However, while listening to songs that narrated stories in around 2 minutes, she realised that it was possible to narrate stories in fewer words as well. Anand appreciated the illustrations done by well known illustrator Taposhi Ghoshal that enhanced the value of the book. She informed that the story revolved around a quiet girl Pooja who chose to keep rather quiet because she thought that she did not have anything important to say to the world. However, despite being quiet generally, she was gifted with deep communicative skills and communicated genuine love for animals. Later Paro Anand also had a conversation with Rupa Bishnoi in respect of her book that has been very well received. Tributes were paid to late Kamla Bhasin who lost her battle with Cancer in September this year. The function was titled Satrangi Ladke Satrangi Ladkiyan. Here Festival Director Jyoti Dhawan was in conversation wit Jo Chopra. Festival Director Dr Sanjeev Chopra was also present in the discussion.