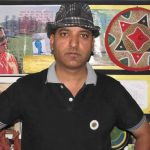 By Jayprakash Panwar ‘JP’
The foundation of the modern mountain city, Rudraprayag, was laid by the visionary Swami Sachidanand Maharaj, who was blind by birth. Unfortunately, he is almost a forgotten social revolutionary like others in history.
Swami Sachidanand was born on 28 April, 1884, in a Bartwal family of Chamswara village of Talla Nagpur, in present District Rudraprayag. His childhood name was Sajjan Singh Bartwal. Though he was blind, even so, he always contributed to the household work of his family. His favourite pastime was running a hand flour mill. During the work, he always talked to himself about nature and spirituality. His thoughts became the ideal not only in the family but also in the village and neighbouring communities. The Bartwal family was very reputable during the rule of the Garhwal dynasty and, later, the British. His family found that this child was different and had the potential to be a great scholar. His father was looking for an opportunity to send him out for education, learning, and exposure. Finally, as a child, Sajjan Singh Bartwal went to Kashi–Varanasi, where he studied Ved, Vedant, Upanishads and Jyotish. After completion of his religious studies, he shifted to Haridwar and started religious teachings in various schools, religious events and gatherings, villages, and communities. Very soon he became a very famous saint.
However, he always wanted to come back to his village. In 1914, finally, he came back to Rudraprayag and settled down in the Rudranath tTemple premises designated as 108 Swami Sachidanand by his Guru. During that time, Rudraprayag was a village but it was a popular halt for the pilgrims visiting Badrinath and Kedarnath. At that time, there were no proper facilities for pilgrims and travelers. In the name of infrastructure, only a revenue office and a two-room guest house existed in Rudraprayag. Swami Sachidanand started taking the necessary initiatives, one by one. The first priority was to construct a Dharamshala. With the help of contributions by the local community and donations from his followers, he completed the construction of big guest house near the confluence of the Alaknanda and Mandakini rivers popularly known as Rudraprayag among the famous Panch Prayag of Garhwal. In 1925, he set up the ‘Shri 108 Swami Sachidanand Vedbhavan Sanskrit Mahavidhyalaya’. At that time, there was no such educational institute beyond Haridwar. In 1944, he founded a middle school in Rudraprayag, which was upgraded as High School in 1948 and further upgraded as an Intermediate College in 1951. Actually, Swami Sachidanand wanted this school to become a Degree College but was unable to do till his death. “108 Shri Swami Sachidanand Mahavidyalaya, Rudraprayag”, a wall writing in the school building till 1984, has been seen by the writer of this article. Following this, the Swami also set up a middle school separately for the girls, which is now an Intermediate College. At the appeal of Swami Sachidanand, the villagers of Punad donated about two hectares of agricultural land for its playground.
Swami Sachidanand had always been focused on education and health. Once he had accomplished his vision of establishing educational institutions, he pushed his dream further to build health infrastructure. Finally, his dream came true with the construction of a hospital that is now the district hospital of Rudraprayag. Further, he also established a veterinary hospital. During his life span, Swami Sachidanand renovated the old temple group of Rudranath, and the Kali Temple near the confluence of the rivers.
His contemporary, Dr Sampurnanand, then Education Minister of Uttar Pradesh, was much impressed with the work done by Swami Sachidanand. The Governor of Uttar Pradesh, the late Kanheyalal Maniklal Munshi, has written extensively about Swami Sachidanand in his book, titled “To Badrinath”. Famous travel writer, the late Rahul Sankrityayan and many national and international visitors, travelers and scholars have written about the contribution made of Swami Sachidanand.
“Even after so many commendable works by Swami Sachidanand, the irony is that the new generation of the modern Rudraprayag city knows little about the name of the founder and his contribution,” says Mahinder Singh Bartwal, a member of the Swami Sachidanand Foundation. This is why a few young social workers like him came forward to remember him and his works by establishing the Swami Sachidanand Foundation, this year. The first task taken up by the foundation was the planting of five prominent tree species like Rudraksha, Pipal, Banyan, Deodar, and Mango. This year, during the Harela festival, they have planted these trees in the Vasudev Temple premises at Jakholi, Suryaprayag, Geed, Chatoli in Tilwada, Nagar Panchayat, Mai Ki Mandi at Rudraprayag and one dozen villages. Along this village path, resting places, schools, and public places were prominent locations for the plantation, says Mahavir Singh Jagwan, a social worker and member of the Foundation. From next year, the foundation will organise the birthday celebration of Swami Sachidanand to remember him on an annual basis. Along with the above activities, the Foundation has taken the decision to install a memorial stone at the Rudranath Temple, district hospital, and schools, revealed Mahinder Singh Bartwal.
(Photos Courtesy – Salil Dobhal and Tarun Panwar)
(The writer is a Freelance Journalist, Radio & Television Presenter and a Documentary Filmmaker)