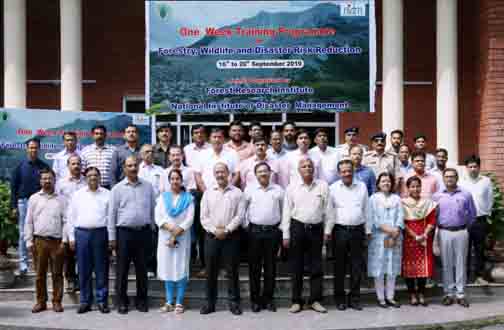 DEHRADUN, 16 Sep: National Institute of Disaster Management, New Delhi, and Forest Research Institute, Dehradun, are organising training for officers of the forest department, Eco-Task Force, ITBP, CSIF, Wildlife Experts and BSF, at FRI from 16 to 20 Septemeber. The training will be in “Forestry, Wildlife and Disaster Risk Reduction”. The expansion of population near forest areas can cause disasters like forest fire, landslides, man- animal conflicts, which can damage lives and properties of the people especially in the Himalayan regions. The normal fire season in India is from mid-March to mid- June. Uttarakhand witnessed the most severe forest fires in recent times during April, May and June of 2019. According to the Uttarakhand forest department, the total number of fire events were 2100 recorded up to 31 June. As much as 2412.45 ha of forest area, wherein 70% was chir forest, was affected by forest fires. Every year, many people residing near forests are killed by leopards, elephants and tigers in the country. The frequency of cloud bursts, landslides and flash floods in the hilly terrain is now increasing in the rainy seasons. This year, cloud bursts and flash flood have damaged the properties of the local people in Uttarkashi and Chamoli Districts of Uttarakhand. People have migrated from their native villages due to disasters. The basic purpose of the training is to sensitise the officers of forest departments, wildlife experts and paramilitary forces on the extent of damage caused by the disasters. The reasons for occurrence of forest fire and landslides, the steps that can be taken to prevent or minimise the losses due to fire and landslides by use of various Remote Sensing and Geographic Information System tools and by developing a strong network between other departments of the government and Joint Forest Management Communities (JFMCs) so that massive forest disasters and wildlife conflicts could be controlled are being explained. To enlighten the participants on the issue, lectures of faculty from institutes like Uttarakhand forest department, Indian Institute of Remote Sensing, Forest Survey of India, National Institute of Disaster Management, New Delhi, ICFRE and FRI are planned. The training was inaugurated by AS Rawat, Director, FRI. He advised participants to learn new methods and technologies developed by various institutions on prevention and control of forest disasters. He emphasised that fire lines and any fuel material lying on the forest floor should be cleared before fire season. Sufficient funds ought to be provided by the state governments. The crew members and local community should participate actively in combating forest fires. The Course Director, Arti Chaudhary, Head, Silviculture Division, welcomed the participants. Dr AK Gupta, Professor from NIDM, said that the mixed group of forest officers and officers of the paramilitary forces would manage disasters well, especially in difficult areas. He invited participants and officers to the Disaster Risk Reduction (DDR) symposium on “Disaster Resilient and Green Development for Sustainability” being organized by NIDM, New Delhi. Dr AD Kaushik, Senior Faculty from National Institute of Disaster Management, New Delhi, told participants about training programmes being organised his institute. SK Thomas, Assistant Silviculturist, FRI, organised the training programme.