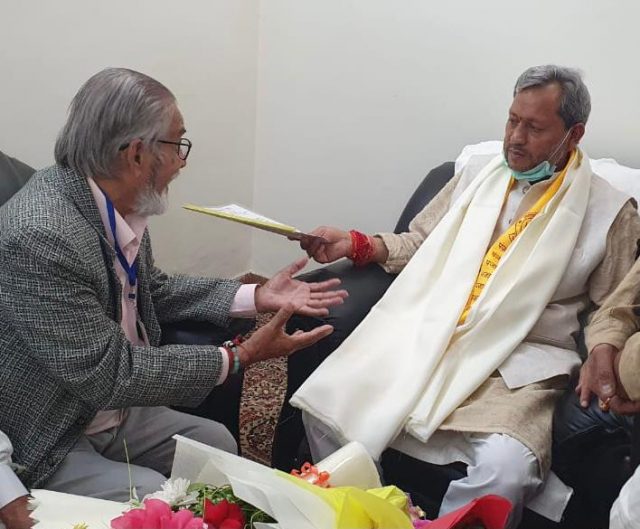 Dehradun, 2 Jun: With the Covid curfew in the state having been extended till 8 June, industry continues to be in a state of flux, even as it had been very badly affected since March 2020. There is anxiety about the stance of the government in terms of easing the situation and reviving the economy. Keeping this concern in mind and to dispel the misconceptions cropping up in the minds of industry persons, Rajiv Ghai, Co-Chairman of the Uttarakhand State Chapter of PHD Chamber of Commerce and Industry engaged with Dr RBS Rawat, Principal Adviser to the Chief Minister and obtained first hand information in this regard.
Dr Rawat confirmed that there has been a steady decrease in COVID cases. The medical support infrastructure had been quickly upgraded with 4899 ordinary beds, 4800 Oxygen beds, 722 ICU beds and 356 ventilator beds which are available in the state at present, which is about 50% of the total available capacity. The recovery rate has gone up and average cases have gone down. He also emphasised that there is no shortage of medicines and the situation under control.
With this, there is a general sentiment of optimism in industry with the hope that economic activity will fall in place.
Dr Rawat added that CM Tirath Singh Rawat had been reaching out to the ground level by visiting every district and personally reviewing the arrangements. As many as 345 new doctors had been hired and every DM and CMO had been instructed to recruit medical staff. An amount of Rs 1 crore had been allotted to the MLAs in each constituency for maintenance and management of medical facilities.
Ghai appreciated the measures taken by the State Government by keeping the restrictions limited unlike the complete lockdown during the first wave. This helped the industry to continue operations to an extent, although the capacity utilisation had been very limited. He was of the opinion that economic activity is expected to resume pace soon.
Dr Rawat revealed that the state government is proactively looking into possible interventions and preparations required in case of a third wave. He also invited members of the PHD Chamber to participate in a dialogue in this regard with state authorities via a video conference soon, which would be chaired by the Chief Minister. He acknowledged the need for smooth running of industry to bring the economy back on track.
He promised that the State Government would ensure that red tapism will not be allowed to constrain the economic development process. Decisions would be taken to achieve the Ease of Doing Business target of bringing the state among the top five.
Dr Rawat assured PHDCCI President Sanjay Agarwal, Sr Vice President Pradeep Multani, Uttarakhand State Chapter Chairman Verendra Kalra and Co-Chair Rajeev Ghai that government would do its best to boost industry. He promised cooperation in getting their workers and staff vaccinated as soon as possible.