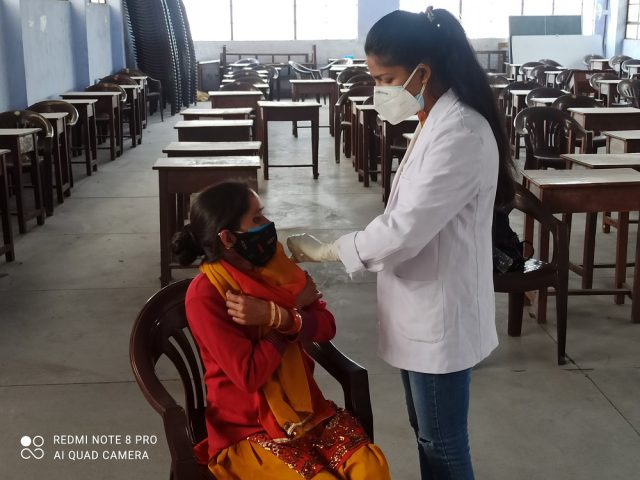 By Our Staff Reporter
Mussoorie, 7 Jun: Work on free vaccination of people in the age group of 18 to 44 years has been started once again in Mussoorie. Earlier, it was mandatory for the people of 18 to 44 years of age to book the slot with registration, due to which people had to face a lot of problems. This was because of connectivity problems in rural and hilly areas around Mussoorie and people not having Android phones.
Through the efforts of Cabinet Minister Ganesh Joshi and Mussoorie BJP President Mohan Petwal, the requirement of booking slots has been waived by the state government and now people are being given free vaccination on the basis of Aadhaar card, while on the spot registration is being provided.
Mohan Petwal said 100 such people will be given free vaccination every day. On Monday, the administration and the police had to put in a lot of effort due to the large crowd of people arriving for vaccination. Petwal has asked all the people to exercise restraint and cooperate in the arrangements made by the administration.
Dr Pradeep Rana said that, if the quota of vaccines is increased, then as many as 300 people can be given free vaccination every day.
Local youths Anil Singh and Abhilash expressed their gratitude to Cabinet Minister Ganesh Joshi for vaccinations on the basis of aadhar cards. Present on the occasion were Mussoorie Mahila Morcha General Secretary Sapna Sharma, Ajay Sodiyal and others.