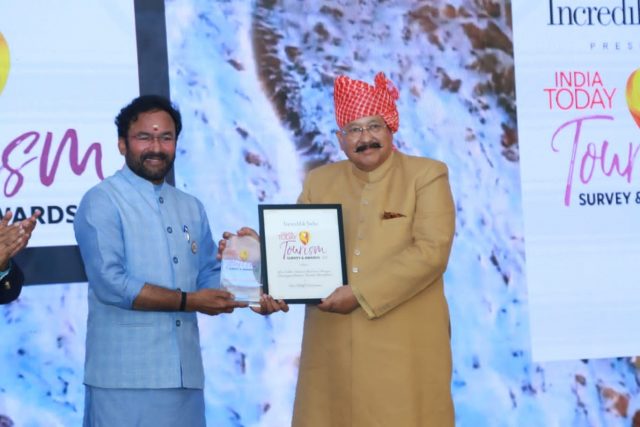 New Delhi/Dehradun, 12 Nov: Proving its excellence in tourism, nationwide, Uttarakhand has won prestigious national level awards in three categories. Among them, the state has won the Best Wildlife Destination, Best Adventure Destination, and Best Spiritual Destination Awards.
Union Tourism Minister G Kishan Reddy presented the awards to Uttarakhand Minister of Tourism, Satpal Maharaj.
India’s finest tourist destinations were given awards in 9 separate categories. Out of these, Uttarakhand has won three. Jim Corbett National Park in the state has been declared as the Best Wildlife Destination, Rishikesh as The Best Adventure Destination, and Kedarnath as the Best Spiritual Destination.
Union Tourism Minister G Kishan Reddy said, “Under the guidance of Prime Minister Narendra Modi, major initiatives are being taken to promote domestic tourism and promoting India internationally.”
The India Today Tourism Survey and Awards 2021 were distributed in New Delhi on Friday. After receiving the award, Tourism Minister Satpal Maharaj said, “After the Corona crisis, Uttarakhand has emerged as a major hub in tourism, wellness tourism and AYUSH. Uttarakhand has been the destination of choice for its natural beauty.
“It has been continuously attracting tourists from abroad. We have immense potential for adventure tourism and we are now a prominent destination for adventure seekers. Keeping this in mind, we are also constantly working to promote adventure sports. Jim Corbett National Park is a perfect destination for wildlife lovers as well as nature lovers.”
Uttarakhand’s prestige has increased manifold with these three awards. Maharaj emphasised that the government is committed to promoting tourism in Uttarakhand in an environment friendly manner and with development of local communities.
The Tourism Minister’s aim has also been to promote alternative pilgrimage sites of the four dhams as winter chardham.