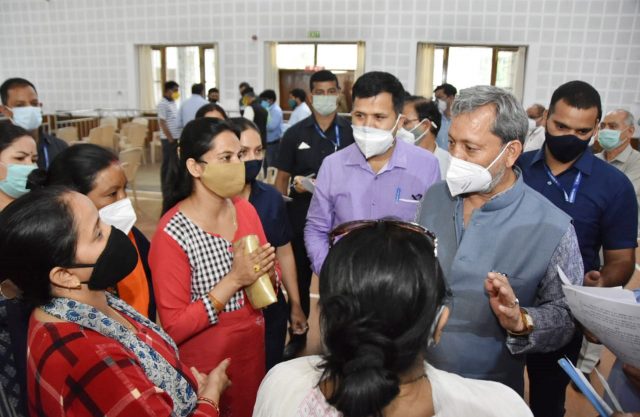 By Our Staff Reporter
Dehradun, 25 Jun: Janata Durbars and Janata Darshan were a regular feature in Uttarakhand during the term of several chief ministers in the past. Even Trivendra Singh Rawat, the predecessor of Tirath Singh Rawat, the present Chief Minister, held Janata Durbars during the earlier part of his term and heard the complaints of the people. However, after some incidents, Janata Durbars were done away with by Trivendra Singh Rawat.
The present Chief Minister Tirath Singh Rawat has, however, made his intention clear about holding the Janata Darshan camps and hearing people’s complaints on a regular basis. Today was the first such day when he held a Janata Darshan at the CM’s Official Residence and heard complaints of people and gave directions to the officials concerned to resolve these at the earliest.
The Chief Minister said that the first priority of the government was to solve the problems of the people. The Chief Minister resolved many complaints on the spot by giving necessary instructions to the officials concerned. In his first Janata Darshan, the majority of the problems were related to related to demands for road, medical aid, drinking water supply, electricity supply, financial assistance, social welfare pension, etc. The CM directed the officers concerned to resolve the problems at the earliest. Rawat said that people’s problems would be heard regularly from time to time and full feedback would be taken from the officers to resolve their problems. Instructions had been given to the officers to solve the problems within a stipulated time period, he declared.

Garhwal Post has established itself as a credible, balanced and forward looking newspaper in India. Based in Uttarakhand, the daily is read by the aware, socially and culturally responsible, high-income elite of society.
Contact us: info@garhwalpost.in
manhunt hookups https://garhwalpost.in/the-best-usa-dating-app/ free online black dating websites